Sometimes it is difficult to write about my experiences in Belize while I am there. Brief periods of time off require my attention elsewhere, and before you know it, I am on my way home. And when I get home, there are other priorities waiting for me.

But now I have been back in San Carlos for just over a week, and am well-enough rested to recount some of the more interesting (I hope) tales of my travels. Alas, the memory isn't what it used to be...

This season was unique for me in many ways. Island Expeditions is setting up a new trip, for the first time in Mexico, just north of Belize. The fit is good, because travellers can fly in to Cancun, do the Costa Maya Explorer trip, then carry on south to Belize, to participate in one of our trips there, or just explore the country on their own. When I learned of this new trip idea last year, I talked the bosses into having me and Lorena work on it. They agreed to give it a try, and to fly both of us out there. They were also a little short-staffed early in the season, so they asked me if I could do a few trips in Belize as well. Since Lorena was already coming with me, I told them sure, as long as Lorena can come along with me there too. They agreed.


So that is how Lorena and I spent a wonderful two months in Belize. I would go off with the guests, kayaking, snorkeling, sailing, and when I came back to camp, Lorena
was always there. They even set us up with our own tent, an oldie, but still functional. And I had the best of both worlds.

I had a looser schedule early in the season, which meant I had more time to work on Manadi. I did get a lot done, and she is very close to completion. The next step will be a complete gel-coat cover of all the new fibreglass, and then I can finish the mahogany gunwales, and bolt the cross-poles to the deck.

I was a little disappointed in the amas: the basic principle is good but the shape is too difficult to fit to the boat. So while I am in San Carlos, I plan to build new amas, and ship them to Chetumal before I return to Belize next year. The first ama I built, I shipped to Chetumal and carried it across the border. But even though it was built by me, the Belizian Customs agents charged me an arm and a leg for it. So next time I will paddle or sail the boat to Chetumal, install the amas there, and it will be complete. No need to pay duty. But I am getting ahead of myself.

After a couple of months in Belize I found myself heading north into the Mexican state of Quintana Roo, with Lorena and Tim, the head honcho of IE. Together we took a 3/4-built program, and fleshed it out the best we could before the first group of guests arrived.

Let me describe this trip for you. This is part I.

The trip starts in Cancun, where the guests are put up for the night in a hotel and the next day we start our adventure by driving south in a van. After a couple of hours in the van we stop at a place called Dos Ojos (two eyes). There is a massive complex of flooded caves, with multiple openings, or cenotes. One location with two of these openings is managed by the local Mayan community, in which they run guided dives, and snorkelling tours. So for an hour we floated from one cavern to another in gin-clear water. It felt like floating in space. The bottom is littered with boulders that have fallen from the ceiling, and the roof is a constellation of stalactites and flowstone formations. Small fish float curiously around the swimmers, sometimes taking a tentative peck at our skin. We swim over shallow water mostly, but along the edges of the pool the water deepens, and distant lights and bubbles indicate the presence of divers. When you submerge you can hear a strange mechanical hissing noise: this is the sum of all the exhalations of the divers, carried long distances through the water. 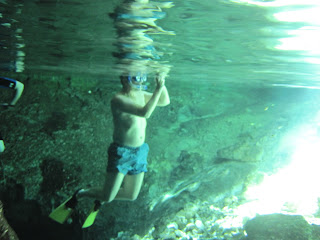 In single file, we glide carefully under a low point in the ceiling, barely above the water level, and enter a dark, circular chamber, about 20m across. A single hole in the ceiling sends a shaft of daylight into the water. From a small island of rubble in the centre of the chamber, a broken and rusty ladder extends towards the hole. In the depths, to the edges of the chamber, the lights of unseen divers peer out of crevices. And everywhere we go we are followed by tiny, curious fish. The effect is eerie, like a scene from a spy thriller. Following the group even in a relatively small chamber, is
difficult. Other people with other tours drift by and it is hard to know who to follow. But we manage to regroup and carry on into the next chamber. 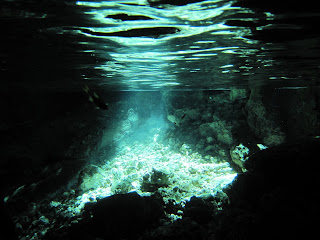 This chamber is open and bright. One entire side of the cave has collapsed, letting in plenty of daylight. We swim through the clear, cool water. We pass a large submarine passage where the bright glow of daylight streams in. This is the passage to the second “Ojo”. One could easily be fooled into thinking that other side is mere metres away, and a deep breath would be enough to allow a snorkeler to pass through. But we are told that the distance is more like fifty metres. Half a football field. Too much for some, so not a good idea. 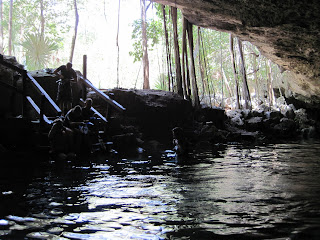 We emerge from the water at the far end and walk the last bit to the final chamber, and swim to the exit. We don't realise how cold we are until we stand in the warm sunlight, in what is actually a hot, dry day. But the feeling is one of relaxed fatigue after the mild exertion of swimming in cool water. The sun streams through the trees and a motmot, an odd tropical bird with two long skinny tail feathers each ending in a tuft, like darts or arrows with most of the fletching gone, looks down at us mortals and chuckles. Soon we are in dry clothes, and after a delicious lunch at a nearby restaurant, we are headed south to the coastal village of Mahahual.

End of Part I.