It is a month since I finished work, and still I have not been able to start the long voyage home. The little modifications on the boat are not the problem; it is getting my registration papers. I do not blame the folks at the Ship Registry: they have been very quick and helpful. Even though they can’t seem to find the document I sent them a month ago. But shit happens, things get lost. No, the big delay was because I was jerked around for so long by the Canadian Consular Services. A pox on them.

Anyway, when I realized that I have already been in Belize a month longer than planned, that it would probably take another three weeks before my papers arrived, and that my finances were depleted, and hurricane season was fast approaching and freaking Lorena out, I decided to pack it in for the season. Next year I will work a short season, and have the Manatee to play around with on my time off. Then I will come straight home and that is simply a better option.

The trick is getting home. I was almost out of money and couldn’t seem to get at the money I had. So Jaime and I took the bus to Cancun, where he was headed anyway, and bought a flight to Tucson. What a trip. All-night bus ride. An unforgettable taxi ride with an old-timer in coke-bottle glasses driving down the highway at 15 miles an hour an aging Chrysler New Yorker land-yacht, that steered like a barge in a following sea, on a misty night with the wipers set on interval: an interval a bit too long, so we would completely lose sight of the road a second before the windshield was wiped clean, and he would have to swerve this big beauty off the gravel, or out from the kill zone of an approaching car. And all the while he was complaining about how there was no shoulder and not any kind of paint on the road to indicate which half was his, or where the pavement ended. After my earlier experiences on Belizian highways, I lost a pound of sweat that trip.

I remember thinking as we drove into Mexico, that no matter how poor, or prosperous, or how well-kept or how run-down it is, there is a vitality to this country that makes it exciting to be in. By comparison, much of Belize lacks any sign of vitality; in some places it lacks a pulse. I also remember that there is a smell in the air in Mexican towns that immediately distinguishes it from any other country I have been in. It is sort of a combination of diesel oil and cooking grease.

Back to Cancun. We got in in the early light of a new day, and found a cheap hotel, had a bit of a rest and got cleaned up. We spent too much time and money finding a way to buy a flight for me with his credit card, but we got it done and took a bus to the beach. We walked the sand for a couple of miles, noting how much of the damage from last years hurricane has been healed or is in the process. And the lack of topless women. We did find two though before rain drove us all off the beach, so it was worth the walk

I didn’t tell Lorena I was coming home, so when I got on-line at an internet location, I had to lie to her about what I was doing. But my absence and her worries about tropical storms was taking a toll on her, and I compromised: I told her I was going to come home. I really wanted to surprise her completely when I showed up, but it was too cruel making her suffer just to satisfy my selfish desire to see her reaction. So I gave her some hope, and kept from her how close I was. Judge me how you will.

When I got to Tucson I had $20 in my pocket: not enough for a cab, let alone a bus ticket or hotel, but my good old brother came through and put some cash in my account. And I took a cab directly to the bus depot and at 11:00 that night I was on a bus for Guaymas.

She got her surprise at about 8:30 the next morning, and it was worth it. She is happy, and though disappointed, I am relieved and happy to be home again too.

To my readers who have been following along with my efforts, I plead to you not to give up on me yet. I had to make a difficult choice, but what’s another delay if it means I go when it is safest to do so? Who would deny me that? And those of you who have given me your support through generous donations of equipment and clothing, I will requite. Next year.

In the meantime I may add a note or two, and I hope what I say is worth a chuckle or a knowing smile. To all I wish you the best.

Still waiting in Dangriga, but not idly. I am still working on the new outrigger, and in the meantime I decided to paint up the manatee in some more nautical colours. The matt black colour of the epoxy paint and her sharp lines made her look like a stealth bomber. Plus black might get a little hot, on the deck surfaces and within the compartments. 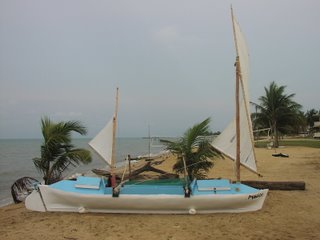 A couple of things to note in this photo: first, the name "Manadi" is painted on the bow. Manadi is the Carib or Garifuna word from which we get manatee. The emphasis is on the middle syllable. The second thing you may notice, is the green netting between the akas (crossbeams), between the canoe and the outrigger on the opposite side of the boat. The boat is sitting on two rubber boat fenders, which are not supporting the weight at all. I was hoping to use these as rollers, but I may have to fill them with something first, like dry sand, to give them some support. 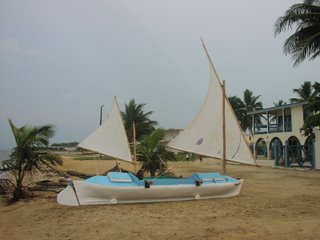 This second shot shows her sails better. This is how she will look running before the wind. Today she goes back in the water for her second sea trial. I am hoping she will sail drier with the raised sides. Maybe I'll get some photos of her underway as well. Cheers. 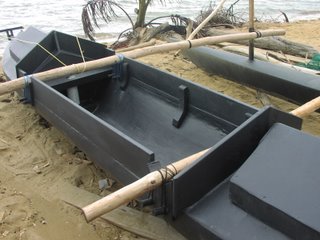 Each day gets me a little closer. While I await my ship registration papers, I have been fixing the glitches. First, that she isn't sea-worthy: this is a biggie. I added some planking to her sides, adding six inches of freeboard. I also installed deflectors fore and aft, to keep the cockpit drier. 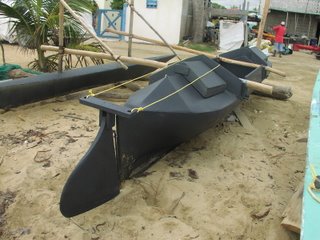 I also installed the rudder. I have to work out how to control it, but I will do that in the water. It is a strange characteristic of this type of sail, that the bulk of the steering is done by manipulating the sails, and the rudder is for a quick push to get her turned. We'll see how that works.

I am still waiting for the ship registration papers to come in. I got severely held up by the Canadian Consulate. I am very unhappy with the runaround they gave me. You see, it is important to me to register the boat as a Canadian vessel. This grants me the protection of the Crown, whatever that may mean, and allows me to identify the vessel as Canadian by flying the Maple Leaf off the stern.

To register a vessel, you need to provide all kinds of documents, including a declaration of ownership. If the vessel is being built outside of Canada this form needs to be notarised by a Consular Officer. Well the nearest Canadian Consulate is in Guatemala City, but Belize has an Honorary Consul, (certainly more of an honour for her than for Canada). I called and asked for an appintment to see the honorary consul, explaining my need. I was asked to give my name, a time period convenient to me for the meeting and a phone number where I could be reached, and when the Consul would come in, she would check her appointments schedule, and make one for me. "When will she be in next?", I innocently asked, and was told she only comes in when she has an appointment scheduled. I wondered how she was ever going to get an appointment if she only made them when she came in, and she only came in when she had one. Seems a convenient lifestyle to me. I hope she isn't paid for this "Honorary" position.

After two months of this nonsense, I called once again, and was told "We have been trying to reach you. I'll get the Consular Officer and ask her to call you right away." I was aghast: finally some break in the inertia. So a few minutes later, a Consular Officer called me, and told me that my situation had been discussed in Guatemala, and that they were not going to cooperate with my request. I should go to a local notary or lawyer and get them to notarise it for me. Shit, I could have done that months ago. so the next day I did. Now I am waiting for my papers to arrive.

In the meantime, there is still work to be done. The Manatee looks too much like a Stealth bomber, and, although the epoxy paint is hard and strong, I want more layers between the boat and the water. Plus I thought that a black boat might be a touch hot under a tropical sun. 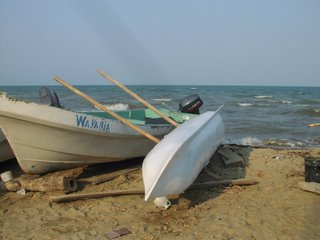 So how about a white boat, with blue trim and decking? Tomorrow another coat goes on, and then I'll turn her on her side and paint the topsides.

Riding my bike around Dangriga the other night, I was mentally saying goodbye. It is a different impression you get of a town at night: reggae music spills out an open doorway, light leaks out a thousand cracks in a clapboard house, riddled with termites and dry rot. After a while you realise all sorts of people are watching you ride by, sitting silently in porches or on concrete steps, shadows in the cooling night air. You ride half standing, to cushion the shock of unseen potholes, watching for dogs out for mischief. Everyone you pass says 'goodnight'.

I like the people here. Everyone calls you brother no matter what colour or race you appear to be. They are well mannered, especially the kids. The women scare me though. They can be pretty big and they yell and swear a lot. hehe.

I'll be finishing up pretty soon and I hope to have some pictures of her under sail. But first we'll see if she keeps the waves out. Until then