Let's start with Half Moon Caye. as the Belize Audubon Society says, "It all started with the boobies." In this case it was the red-footed boobies, which have a large nesting colony here. To see the boobies, you follow a trail along the north shore of the island, which then turns inland. You hear them before you see them; strange croaking noises, bill-clapping and other noises beyond description fill the air. As does the smell of guano, also known as birdshit. Peering up into the trees, you can see boobies peering back down at you, sitting on nests that are no more than a few meagre twigs jammed into the crotch of a tree.. They are so tame that they are not the least stressed by the presence of people who are walking quietly beneath them. Presently you come to an observation tower, and a few steps takes you to eye level.

There you see the boobies, and frigatebirds all nesting together. People wonder why boobies would tolerate their arch-enemy, the frigatebird to nest so closely. It is easy to imagine that having the same bully that stole your breakfast from you sitting in the next nest over would be intolerable. But the birds don't take it personally. The frigates are no threat on the nest, and there is safety in numbers, from real nest predators. so they live and let live.

The first two shots are of mature red-footed boobies in the white colour phase. This phase is less common globally than the brown-with-a-white-tail colour phase, but here on Half Moon Caye, the white birds are by far the more common.

The second shot, you have figured out by now. It is all a confusing mess. Newborns are all-white and fluffy. When they lose the baby down, they are brown. Only at maturity do they reach their final colour pattern. 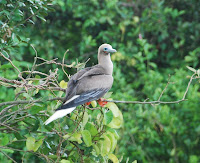 Sometimes a bird falls from the flimsy nest and is rejected by the parents. The Park Rangers may try to replace the bird, but if the parents won't have it then they raise it themselves. Sometimes these orphans eventually take off and go off to feed themselves, but not Gilly. She liked people too much. When placed with her kin, she would immediately fly back to the park office. She would often be seen landing on the outboard motor of an approaching dinghy, begging for fish scraps. She even landed on my kayak a couple of times, then finally landed on my hat. She stayed on my hat all the way back to the beach until I set her on the fish-cleaning table.

She would even make a nuisance of herself when James and Adolfo were trying to clean the day's catch.

We also get in the water to do some snorkelling. Here is Dawn consulting the Oracle, a huge brain coral. Also shown is a hawksbill turtle. Hawksbills are the most common turtle found in the shallow water, but are often too shy to watch for long. They graze on algae and eat a variety of marine mollusks. This is the turtle that was once prized for "tortoiseshell" jewellery, and was saved from extinction by the development of cheap plastic substitutes. Ironic, considering floating plastics are arguably the greatest threat to the survival of several sea turtle species. 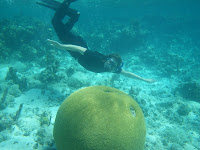 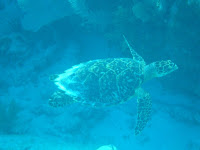 Can you see the stonefish in this picture? If you can you may even notice a small sharp-nosed puffer picking at the stonefish as if it were indeed a rock covered in marine growth. 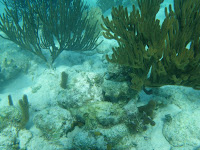 I couldn't resist including this shot of a reef squid checking out a school of snorkellers. Reef squid are real characters; they swim in formation, changing colour and even flashing white and dark. They have amazing control over their skin pigment, opening and closing pigment cells called chromatophores with astonishing speed. 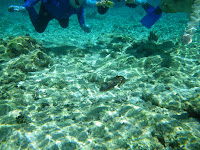 The weather isn't always as it appears in the literature. Sometimes a squall hits us
and dumps a heavy rain for a couple of minutes before it passes. This is Victor smiling because he was smart or lucky enough to still be in the water when it hit. Pity those who sat through the rain on the boat, but not too much. And if you look closely between the engines you will see the head of yours truly, avoiding the rain altogether. 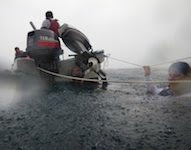 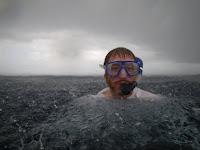 It isn't always raining either, Much more often we have a flawless sky and sometimes the wind is just right for a sail..... 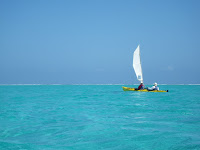 Just in from Glover's Reef and want to post some photos from some of my guests.

The first is an iguana in a tree. During the winter months the males climb up into prominent spots where they can display their size and orange mating colours. Preferred sites are in the tops of trees directly over water, for a quick getaway if needed. This magnificent specimen was in his prime and probably had several females hanging around in nearby branches to get a piece of him when laying time comes around.

Next is a Morelet's crocodile. This species is smaller and less aggressive than the American crocodile, and unlike the American, is found only in freshwater rivers and lagoons. This fellow was hanging out in the branches of a downed tree along the banks of the New River.

Half Moon Caye hosts a nesting colony of the rare and beautiful white-phase red-footed booby. Trails wander under the booby nests, leading to a three-metre tall observation tower. Standing on the tower, visitors are surrounded by nesting boobies and frigatebirds, almost within reach. This pair of boobies was sharing the duties of feeding each other and sitting on the nest.

Thanks to Birgit Kuhle, for the booby pic, which I have posted with her permission.