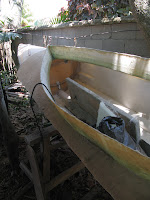 This season in Belize, I have a much looser schedule, and have had plenty of time to work on the Manatee. This is in marked contrast to last year, when I had a total of two weeks in the entire season to get my work done.
The great challenge of making something new from scratch, is that there is a constant stream of problems to overcome. Most of the big problems have been solved, but new ones keep cropping up. For example the edge of the cockpit opening has a coaming to deflect water, that stands about six inches high. This would deflect a lot of water, but it will also break, or at least crack and weaken, if I put too much pressure on it.

So I decided to to strengthen it with gunwales, of mahogany. I bought a ten-foot by two-by-eight-inch board, and got it ripped into quarter-inch by two-inch strips. These strips were then bent around the coaming 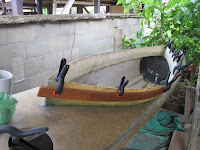 and clamped in place. After cutting them to the right length, I removed the strips, then laminated them together with FG resin. Once I applied the resin, I wrapped them in waxed paper to catch the drips, and re-clamped them onto the coaming again. This had to be done to each inwale and outwale separately, so it took a bit of time. 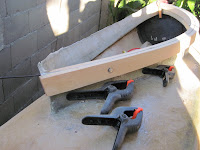 Once the gunwales were complete, I had them planed and sanded them smooth. Then I drilled and bolted them to the coaming with stainless steel hardware.

This week I also installed the mast step and laid the base for the deck hatch. All that is left to do is drill the holes in the coaming for the aluminum poles that connect the hull to the amas, and the holes for the threaded rods that will be used to clamp them down. Then the boat will be ready to spray with gel-coat. 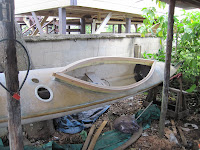