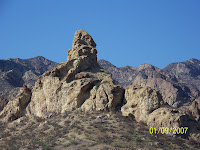 I had a writer here for a few days. His name is Roland Pelletier, and he is writing a book that takes place in Guaymas in the 1850’s and wanted someone to take him around the city and into the desert. It seemed an easy assignment.

I took him for a hike in the desert. Ordinarily we don’t hike in the desert at this time of year; it was 107F or 42C today (the day I am writing this), at noon. But this was when he came, so off we went. It was a typical summer day; a cloudless sky of rich blue, like looking up at the Caribbean. We walked over some rolling hills and open country at first. The desert is very dry; months without rain have taken every leaf from the shrubs and trees, leaving a brown and grey landscape. The only green is the odd organpipe cactus, scattered along the hillsides, and the dense thornscrub in the deeper washes, where water is available year-round. Two deer bounded into a draw as we crossed over a hill. I wondered what they found to eat. We crossed a wash and strolled over the open ground beyond. Then we descended back into the wash, at first struggling through the dense bush. Eventually the wash narrowed into a boulder-strewn canyon, with palm trees that rustle in the breeze like flowing water, high walls of worn tuff, riddled with caves. After reaching a blind end at a 20 ft waterfall (dry of course), we decided to back out a bit and then climb the side, to get around the barrier. That’s when the trouble started.

The rock here is rotten, soft and easily broken; a perfect handhold may crumble with a light tug. We ascended the near-vertical sides without incident, but there was no going back the way we came up. The rest was a safer slope, but much of it was loose scree and treacherous enough with good hikers underfoot. And my friend Roland was wearing boots with smooth soles. At least they were rubber, not leather, so they held well onto hard rock. But it was treacherous going. We got to the top, and the other side was a long, vertical drop. We tried to find another way into the canyon we left, but it ended in the same, vertical formations. So the only way was to move laterally, and get ahead of the dry waterfall. This choice was the safer one, but we were already almost out of water. And to carry on meant heading a long, roundabout route through desert wash and dense thornscrub bush.

So we headed on. The sun was hot, the air hot, heavy, and still. Walking under the sun was like carrying a hot stone on your back and shoulders. My water was long gone, (I had only brought 3 litres for the two of us, planning on an hour or two on easy ground), and the thirst was intense. Saliva becomes thick, like glue, or a MacDonald’s shake, and the eyes become dry and uncomfortable. On we trudged, over boulders, through brush, out into the open where the mountains dip down to make a notch. Through this notch we descended into another wash, thick with scratchy, thorny and prickly brush. By this time we walked in silence, automatically moving forward, pushing through thickets, crunching over loose gravel, moving onward, forward, towards water, life and relief from the awful thirst. By the time we reached the last section of our hike, a dirt road over even ground, Roland turned to me and said “My hands are swollen.” I looked at mine and realized the same thing was happening to me. He also asked me if I could feel my heart pounding in my chest. Fortunately I couldn’t, and we knew we would be okay soon, so we became more relaxed, and began to talk again. 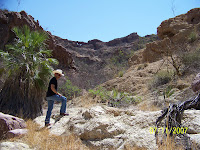 Roland wanted an experience of the desert and he got one. It is important to realize that the desert is not malevolently waiting for you to make a mistake so it can punish you. It is merciless, not because it is evil, but because it is indifferent. Man does not struggle against nature; he struggles against his own fragility, his own limitations, with nature not as his opponent, but as an impartial and disinterested judge. To survive here, you need to know what you need and how to get it. And if you don’t have what you need to survive here, you had better stay on the cilivised side of the edge.

People rarely die way out in the wilderness, far from help, out of communication range. The only people who get that far are those who know what they are doing. People more often die on the edges, near to civilization. Unprepared, unequipped, and caught off guard, they wander lost, or simply get themselves stuck somewhere and perish before they can get back out. We won that particular race, but it could have gone the other way if we were forced, say, to spend the night, or if an accident or injury befell one of us and slowed us down too much. And remember, long before you die from environmental exposure, your judgment becomes impaired, and you make foolish decisions which make your situation worse. So to survive you need enough to keep from getting that far, to the point of no return.
Posted by Jack Wilde at 5:03 p.m. 2 comments:

Well I don't have much to say about the "Voyage". I am in San Carlos, Sonora, a long way from the new Manatee. I haven't even started on the new outriggers, though I have picked up a sail and mast along with a cute little sailboat called a Sabot. I have a new digital camera; the old one suffered an accident with a yoghurt container full of salad in my backpack on a hike in the desert. The resultant leak of oil and vinegar has resulted in the gradual loss of function.

While uploading the last of my photos onto my laptop, I discovered a pair of pictures of the new Manatee. 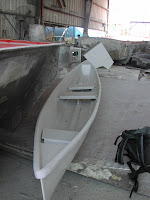 The first is the boat at the boatyard before I bought her. 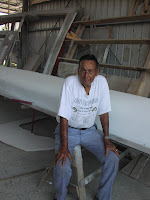 The second is the builder: Mr. Bradley of Bradley's Boatyard, Belize City. He was surprised I wanted to take his picture, but was very gracious. 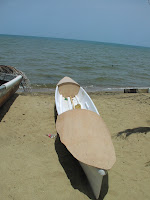 The last picture is of the new boat in Dangriga. I have cut out the plywood moulds for the bulkheads and the decking is screwed on but not yet trimmed. With any imagination you can picture the basic form she will take.

The dogs hear it before we do. The first sign of the approaching storm is the banging at the door by Tequis, who is so afraid of thunder that she tries to get inside. That brings our attention to the flashes of lightning. The thunder soon follows as the storm gets within 15 miles of us.

The monsoon is a wind pattern, not a rainfall. It begins in the summer, when the air over the desert heats up enough to drag the trade winds from the tropics up this way. This brings us moist, tropical air, and eventually, rain. Hence it is called the monsoon rain.

After several months, almost a year in fact, of no rain, the desert is dry, brown, burnt-looking. The sun has baked it until it releases a scorched smell. The cacti are lean, deeply pleated, and the only green things in the landscape, as not a leaf remains over most of the desert. And a walk in the desert raises only dust. But every day since the monsoon began, the air has become a little more humid. At night, flashes of light are seen over the horizon .These flashes, called heat lightning, are the result of static electricity, released as the cooling night air descends. But the lightning I see tonight is the real thing, and the dogs are not at ease tonight.

I have been hoping the rains would come before we head north to Canada. I miss the seasons up there. Here there are only two seasons: wet and dry. Dry is most of the time, but the wet season brings a transformation to the desert that must be seen and heard, felt and smelt to be appreciated. Before the first shower is even finished, the air is filled with the resinous odour of the creosote bush, what is universally known here as the smell of rain. And at the same time arrives the shrill chorus of the spadefoot toad. Lying dormant in the ground since last summer, they begin to emerge in response to the rumbling of the thunder. By the time the rain has soaked the earth, they are crawling out and filling every puddle. Tonight they call out for a mate. Tomorrow they will be silent. The puddles in which they breed do not last long: there is no time for prolonged courtship so by the end of tonight they will have selected a mate and begun to lay and fertilise the eggs. Within days the tadpoles have hatched and started to feed on each other in the mad race to emerge as fully developed toads before the Sonoran sun dries the puddle to a cracked bed of clay.

As soon as the adult toads have mated, they begin to feed and fatten on the sudden emergence of winged termites. These insects are easily desiccated and so they also must mate and seek a place to lay their eggs and start a new colony while the humidity is high. Hopefully they won’t choose the window and door frames of our house.

After the rain ends, the transformation of the landscape begins. Leaves begin to emerge, the desert floor becomes carpeted in flowers. In two weeks, what was bare brown earth and dry grey branches, is green, yellow, orange and blue: a riot of colour and profusion of life. Summer is here.
Posted by Jack Wilde at 6:05 p.m. 3 comments: