Evenings at the clubhouse we like to sit out on the front porch, in the afternoon breeze and have a drink while the sun goes down. There is a surprising amount of wildlife in this part of town. Across the street is a six-story Araucaria (Norfolk Island Pine) tree, with whorls of bushy branches every few feet up the trunk, and a bald top. Lately the grackles (blackbirds) have taken to roosting in the dense bushy branches. So they were understandably upset this week when a bat falcon took to standing on the top of this tree, waiting for the abundant population of bats to emerge from the eaves of the house directly below.

Occasionally a bold blackbird will fly up to the top of the tree, always coming behind the falcon, and if the falcon dives, the formerly bold blackbird and his colleagues will scatter like thieves as he dashes among them. Sometimes he gets pretty close, and the blackbird in his sights will scurry sideways at the last instant cackling wildly, and the falcon will zoom by in a streak of black and white and rusty orange. I don't think he really wants to catch one, as they are almost as big as he, but it is a good warm-up until the bats emerge.

Bats emerge in groups, flying helter-skelter, as the falcon dashes among them. It is impressive enough to see a stooping and diving falcon high over open ground, but when one flashes by between trees and buildings and pops up a block away in a heartbeat, it is breathtaking. We watch for a single bat to emerge, and one obliges, heading swiftly for the cover of nearby trees. The raptor leans off his perch and falls forward, surging ahead with a rapid beating of his wings. Before the bat can cross the street the falcon is on him but the bat pulls one of those mid-air reversals that bats are famous for and the hawk sweeps by. We cheer like fans at the arena. What a show.

Besides lounging in the evenings I have been working on the manatee. Before I install the aft and centre decks, I have to make sure I have done everything else. It will be much harder to work on interior areas of the boat once the decks are in place. I have learned to slow down, to spend a lot of time simply staring at the boat, letting the solutions to problems come to me. One such problem was how to install the rudder. I thought I would have to penetrate the hull with screws, so I cut a hole in the aft flotation chamber and installed a hatch. This way I could get at the inside at the very back, and install a wooden block to receive the screws, and also so that I didn't have a chamber in the boat that could fill with water without my kknowledge or ability to drain it. 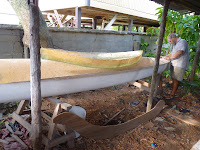 It turns out I didn't need the hatch, because I found a way to mount the bracket by bolting on wooden side pieces that meet at the stern. The side pieces are bolted to the gunwhales, so they don't penetrate the hull, and where they meet, a third piece of wood is screwed on as a tiny transom, to receive the rudder mounting bracket. No holes in the hull. You can see in this picture the wooden brackets bolted into the side of the gunwales. The rudder is from one of my Seaward Southwinds expedition double kayaks, and should be big enough for the job. 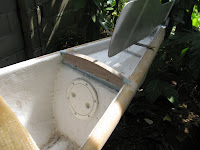 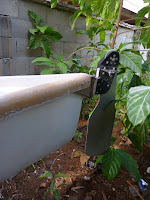 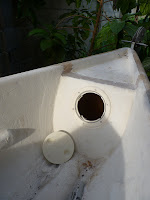 I managed to complete a few other little jobs too, like installing the latch on the aft bulkhead hatch, and mounting wooden dogs to secure the hatches more tightly.

My biggest challenge so far has been the forward compartment. The hatch is on the bulkhead, under a long section of the midships deck and in front of the centreboard trunk. In other words, I can't get at the hatch to open or close it, not to mention manging to stow anything in there or retrieve it later. The only alternative I could think of was to install an hatch on the foredeck. But the foredeck is arched, making it difficult to install a pre-made, flat hatch, and if it were to leak, the water would get into the forward compartment, where I could never see it nor drain it.

So after staring at the boat I came up with a solution. I would install a hatch on the midships deck, above the forward bulkhead hatch so that by reaching through the deck hatch I can open and close the bulkhead hatch, and even reach into the compartment a short distance to stuff things in or take them out. Such a deck hatch needs only be big enough for my arm to reach through, so even if it is flat, it will fit the curved deck well enough not to leak. And if it does leak at all, it will leak into the cockpit where I can bail it out easily. Another problem solved.
Posted by Jack Wilde at 7:33 p.m.